Whatever it Takes to Change the World: Back From OuiShare Fest 2014

I’m home since a few 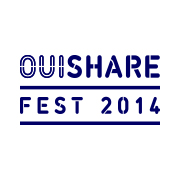 hours but it’s already time to put down an initial assessment of the second OuiShare Fest, that closed doors in Paris on Thursday morning with an incredible #OuiShareLove Party.

The OuiShare Fest, the most important European event – perhaps in the world – about the collaborative economy, it is also the most important tangible product of OuiShare activity and therefore attached to the soul and culture of it and deserving of more than a analysis.

This year, for the second time, I had the privilege of coordinating with Ben Tincq and Diana Filipova the preparation of the program of the conference, mixing a variety of formats.

We produced an event consisting of content characterized by different moods. In particular, we chose the labels Inspire, Debate, Connect, Co-Create and Play to help the more than thousand participants to navigate a program made ​​up of 71 sessions spread over three days.

In a sense, I believe that the program met the characteristics of this emerging organization.

If the act of connecting is at the very soul of OuiShare (that is indeed made of Connectors) is equally true that inspiration has always been key in our work. Last year, right at the usual “braindump” I got to talk about how the collaborative economy certainly offers a way towards empowerment. Inspiration often comes from getting in touch with real life projects and by seeing ideas spread and grow through replication, adoption and remix. Experimentation trumps everything else: this concept is reaffirming with great force one year after.

Global debate, on the other hand, is at a pivotal moment in analyzing the delicate transition and the regulatory and social friction that many of the relevant “disruptors” of this sector are going through. 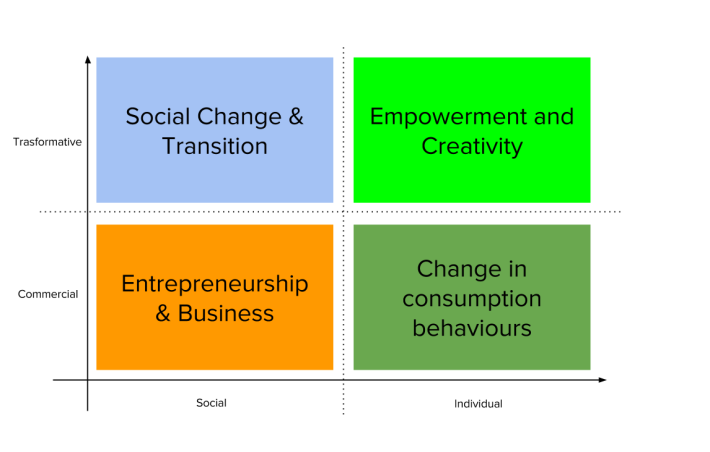 Co-creation was a key ingredient in most of this year OuiShare Fest: the confrontation with the community occurred through a detailed survey shown a greater need for it and – in spite of the logistic difficulties in managing workshops in a particular location such as the cabaret sauvage – we organized several hands on moments.

I would say that this strong turn had great effects in terms of engagement: most of the workshop were really appreciated and I myself have held a crowded keynote and workshop in Camp, to present once again the Platform Design Toolkit.

The component of Experience and Play then come full circle in a decidedly non-negligible way, it has indeed helped to create during all three days, the incredible and unique “atmosphere” of the OuiShare Fest.

There is one thing that today, after the Fest, appears to me more clearly: we are building something more than yet another non-profit organization or a service company. What we are building through OuiShare today is really a culture .

Always this community has consolidated around the mission to catalyze and accelerate the transformation toward a more collaborative economy but could this at the end be its true nature? That of the culture builder: to nurture a culture that pervades society from the inside – through people – and helps to create the change that we tremendously need?

The need to build a shared culture emerges with strenght from the experience of every day. Many of the connectors (in general many of those who are part of this network) have indeed a direct experience of how difficult it is to deal with the major incumbents institutions that reign civil society and the market today such as governments, big corporations and other.

Still today we don’t know much the way this will happen: will it be a revolution from below that is made up of prosumers, citizens and communities? Will large resilient companies be driving it? What role will public policy and administrations, and ultimately democracy, have?

What we do know for sure is that this isn’t just another way of doing marketing. No, I’m sorry.

Therefore, what we are today committed to create, is a cultural toolbox that is available to all those players who want to use it to try and co-create this new culture of transition.

We wanted to create a conference for the meeting and the acceleration of projects and organizations: we did it. We wanted to reach many people and motivate them to take action: we made ​​it through dozens and dozens of events around the world and four summits. We believe that it is necessary to create education and innovation paths for companies to bring them quickly towards transformative change and we’re doing it with conviction.

All this is coming out in an organic way: functional to the promotion of this emerging culture that we are transforming into and that can eventually really happen to change things and have a social impact.

Against this background, the role of the OuiShare brand is growing and this is becoming “integral” to the message: the new heart shaped logo now reflects 100% of the inclusive and welcoming nature of the organization and the community and may in the future play a non secondary role, along with the basic culture that promotes, towards inclusion and spreading of the message.

“Spread the Word” was in a sense the motto of OuiShare Fest: we are aware that today – if we truly believe in our culture – is fundamental to reach new people, try new formats and new languages.

This year, OuiShare also organized – the weekend just before the OuiShare Fest – a rather long and important event, called OuiShare Village, dedicated to people that are less familiar or less informed on the subject, in an attempt to bring them closer and help them understand that they not only can but must have an active role in the revolution at hand. The same Fest was closed by an open Sharing Fair, a concert and an amazing party in an attempt to open doors, intrigue and include new people: the experimentation with new languages ​​will not have to stop here in the future. 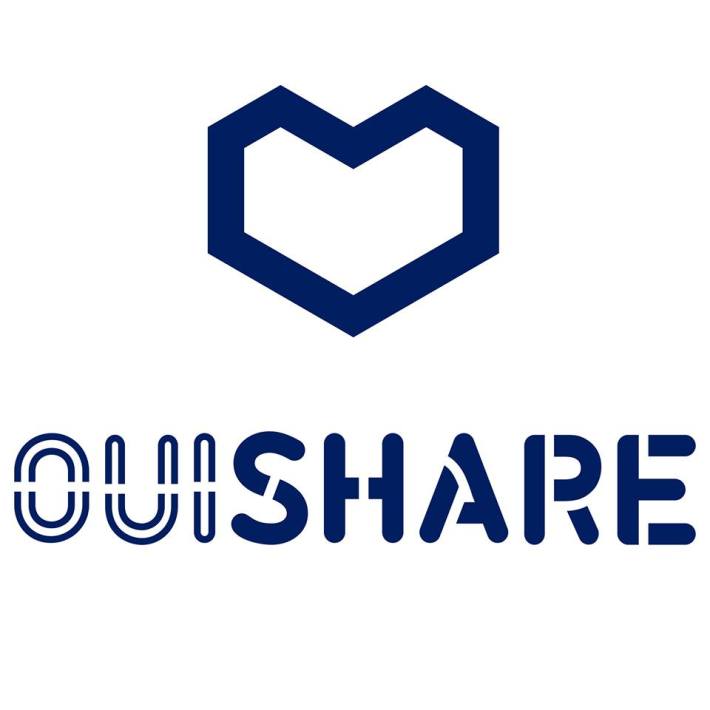 But what are we talking about anyway? Our common grounds range from environmentalism and critical consumption to entrepreneurship and digital activism. On top of these you can find other shared cultural pillars that I would summarize briefly as follows:

(Note that, more extensively, a list of shared values ​​that do a good job in describing what we promote can be found here)

Nowadays, encounter and dialogue emerge as central. In a very important passage of his OuiShare Fest speech (http://sched.co/1gxezoi – Pharmacologie de la contribution), Bernard Stiegler, quoting Socrates, has once again given very important and interesting insights that confirmed my impressions:

I’m a little overwhelmed these days so it’s hard for me to make a conscious and comprehensive analysis of the Fest and all the rest.

From a certain point of view I can say that I feel the need to figure out if this will be a hipster movement (and OuiShare Fest becomes a Burning Man in European sauce) or if we’ll manage to achieve tangible results, that beyond all, remain our goal as an organization and as a community of people.

From an internal perspective I see that we are growing and that our role of connectors consolidates and clarifies. We closed the Fest imagining a Summit in Istanbul and this thing would really give me great joy.

Externally, I see that the community of people who believe that the time has come to take action, engage others and change the models, is growing exponentially. The maturity of the projects we’ve seen in only a year away is encouraging. I mention just two: Open Source Beehives and OpenDesk – little more than ideas a year ago – now truly successful projects. On the other hand a rapidly growing and ever wider and inclusive discussion on impact, choices, policies, the role of companies is undergoing.

It was only a year ago, but the program of first OuiShare Fest would probably blush confrontating with that of this year. And believe me it is not only about our work of curators, projects are growing. The interest of the stakeholders is clear now and growing, especially in France.

Was so impressed with the @OuiShareFest sheer energy & sense of possibility… it feels like a movement. Thx @OuiShare #OSFest14 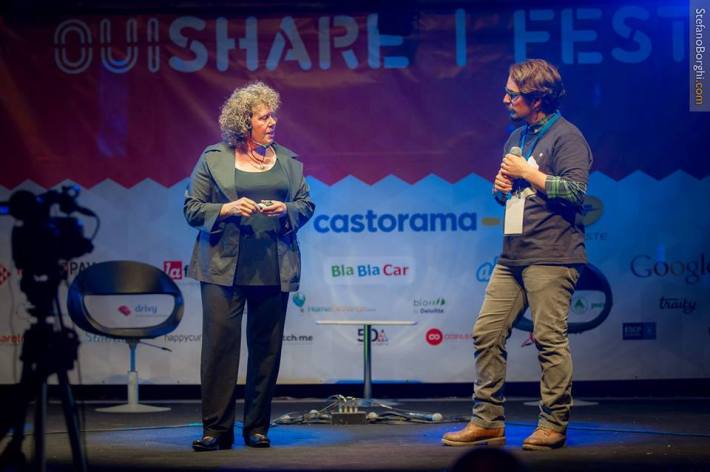 Another thing I want to say, is that it is really possible to create a festival in a collaborative way with a kind of self-emerging program, complemented by a team of curators. You can produce something as complicated as a global conference with a stigmergic and horizontally managed team made ​​of dozens.

It is possible to produce a conference in a way that is focused on the content, but not fundamentalist on the content considering that meeting is equally important as John Thackara reminded us.

The content should be always seen in long-term perspective: there is not much that a panel, keynote or workshop can add in a few hours to a global discussion to which all belong.

Creating this program and conference was a great performance, I really have to thank the whole team Fest – and the Program Team in particular, with Ben and Diana – we did a great job and we are now able to experiment more in the future.

I’ll do karaoke on stage if it takes it to change the world.