As a reader who regularly follows the blog knows, in my latest piece I introduced some new concepts about the theory of niches and, in particular, I focused on showing how communities finally won a productive and inspirative role into the new cooperative product cycle that is gradually establishing.

Communities are now able to expand their presence well beyond the consumption stage – and the historic consumer role – now ranging from design – as the case for open source software, or even of Local Motors Rally Fighter that is “Designed by the Forge community” – to production – as in the case, for example, of OpenWear the “collaborative clothing platform”.

Although there are clearly different maturity levels, depending on which industry we analyse (effectively there’s a not negligible difference between automotive and software), the P2P paradigm is emerging in almost every case.

The following figure attempts to put the different product phases on the same page – though things are not always so linear – and put them in relation with the main actors involved (users, communities and companies) and the roles they play according to consolidated product cycle models, already adopted in different contexts. This portrait helps seeing new unexplored production paths as well as it helps understanding the differences and similarities between different sectors (CLICK TO ENLARGE).

Why the collaborative approach is being so successful among innovators

Beyond the successes already existing in several fields, we can be reasonably confident that the p2p, collaborative model is expected to grow more, essentially according to two fundamental aspects.

First, as previously described and quite clear from a figure that I will borrow from my latest post, mass production tends, by definition, to standardize the products and, therefore, to make them less fit to the needs of the individual. This incontrovertible axiom, will always leave room for an alternative production, more able to respond to one’s special needs, as long as this proves economically sustainable. 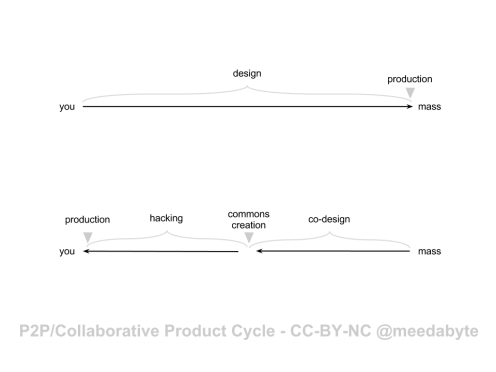 Secondly, the traditional industrial production shows an efficiency and speed gap in comparison to collaborative solutions that, in many fields, are proving less expensive, more innovatione prone, more accessible and ultimately more efficient as this infographic explains – comparing Wikispeed, Local Motors, and the automotive industry:

With this background, a producer who deliberately decides to give up on this new model would certainly be disadvantaged, in the long term, and fated to a weakening market interest.

Rather than asking if a producer, be it an individual, a cooperative, a company or a similar entity, should or should not adopt – or at least understand – these models and exploit these opportunities, we must ask ourselves what roles, choices and paradigms should it embrace and how it should begin to rethink itself and its products lines.

Who does not follow this cooperation path will face leaner and more cooperative, competitors, able to thrive in this new situation, exploiting their Co-operation Advantage to gain market share and customer mindshare.

In fact, the costs to access production are reducing and it is easy for those who adopt collaborative mechanisms to quickly generate significant value thanks to community engagement. They fast become threats to established players: we could mention a lot of examples, just think what he Airbnb did with hospitality, or what Tripadvisor is representing to Lonely Planet.

The goal then is to understand how to prosper in a market that is increasingly linked with civil society: made up of users connected to each other that sometimes require an active role in the production itself.

They claim an own production capacity, they create additional value on the base of the products that the manufacturer provides.

With this background in mind, I had some fruitful and inspiring conversations with the folks at OpenPicus – thanks guys – and I tried to focus my attention on how the manufacturer’s side could eventually find a way to cooperate successfully with the peers system that make up its community and ecosystem.

What is the way?

A special case – but general enough to be an interesting context in which to apply the analysis – is that of players producing intermediate goods, then used by users (both in a B2C and B2B way) to add value in terms of creating complex products or services of any kind.

Take, for example, those who produce software, hardware – such as computers, electronics, tools and machines for printing, for music production or design, etc. …. – or even more complex tools as education, support services such as logistics or, with some respects, information.

For these players the imperative must be to become the facilitator the community needs to better produce and exchange value: the value created by adopting, transforming and composing the original products in widely varying contexts.

The objective of the manufacturer, for example a company, is to leverage community’s guidance while designing strategy, products line up, roadmaps and, eventually, to behave as much as possible in line with community’s expectations and needs.

The act of facilitating additional value creation and exchange – within an ecosystem of different actors – could effectively represents an Opt-In advantage for those who decides to adopt the products end enter the ecosystem.

Around its products, the producer should consolidate an economy – as well as a system of values – using the best tools around to speed up the  interactions between the different components of the ecosystem. The ecosystem could be made of individual users, early adopters, prosumers or companies with which to build cooperation or coopetition: the exchange must be wholly simple, transparent and immediate.

In this sense, some examples of ecosystems that can easily explain the idea could be: wordpress templates and plugins, arduino shields (somehow), or the very famous Mobile Apps ecosystems (being iPhone, Android or others).

In what sense easier?

Supporting the creation and development of an ecosystem, goes through several steps but it all starts with creating – preferably in a cooperative way, in co-design – a lineup of products and services that makes additional products and value-added services creation, as rapid and easy as possible.  By reducing the TTM the opportunities to create new value on top of the product line in question becomes instantly more attractive.

To name a few product characteristics, let’s focus, for example, to homebrew and prosumer electronics components (that’s why I’m thanking the Openpicus guys). This kind of products must be highly modular, they must provide strong support for standards and existing certifications (if any, mainly FCC and CE certifications in this case): by doing this, the producer will ensure that those who use these products can easily combine them among themselves and with others, and easily marketize their complex products and services in a safe and immediate manner.

Furthermore, you – as a producer – need to create places for value exchange (like marketplaces), places of knowledge explicitation (such as wikis), places where skills about products emerge, compare, and gain visibility and recognition (like forums and communities). This contributes to generate exchange dynamics such as those which enable a rapid ecosystem growth in both quantitative and, especially, qualitative terms. 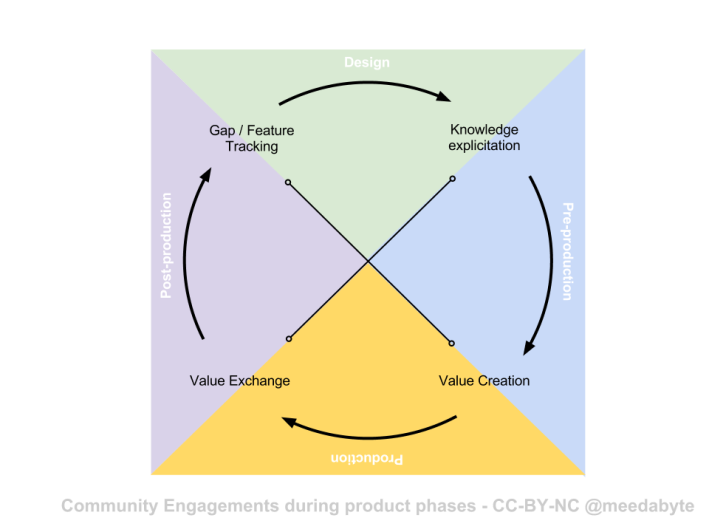 From an investment dynamics point of view, similarly to what happens for traditional industrial production, the early phase requires value to be injected into the system. Unlike the traditional context however- where initial investments are substantial and product value decreases along with the marginal costs of production over time – in the collaborative development the initial investment is usually small and coincides with the creation of places for community engagement. 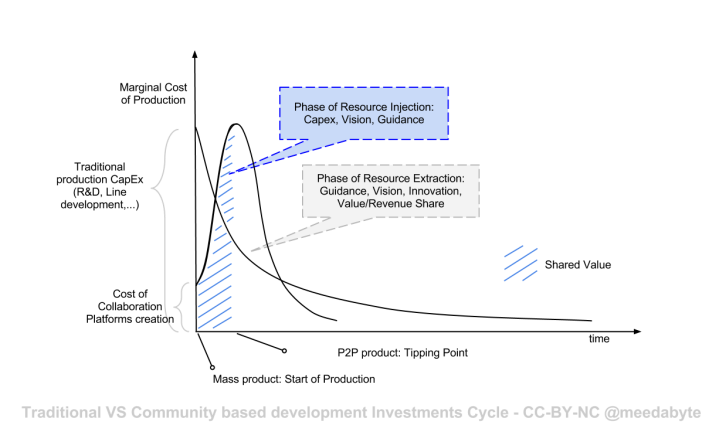 This stage is then followed by a more complex one during which you continue to inject value to build a community: soon, however, the community itself begins to produce value autonomously in case you’ve succeeded to build an ecosystem.

If things go well, during the following phase the manufacturer/producer does not actually inject more resources but instead, by acting as a catalyst, it can extract innovation, strategic leadership, workforce and revenues.

The very same cycle has a much smaller duration, allowing for faster product iterations and, ultimately, helping to innovate more radically.

These are just some of the reasons that lead me to believe that the P2P production represents a true evolution of mass production. It seems to me a production process that finally learned how to tame the globalization and the global society.