The Future Proof Enterprise: how to create Resilient, Enduring and Meaningful Businesses

This post orignially appeared on Shareable, on July the 17th 2012.

This post has been translated in Spanish, Catalan and in French (thanks to ouishare) and appeared also on Les Echos.

These days, we can’t pretend not to see how the mechanisms by which we produce and consume our wealth are, finally, showing some growing signs of change.

The many alerts showing the urgency to change—such as the numerous speculative bubbles, the growing environmental impacts and social inequalities; to name a few—are eventually pushing society to begin questioning the “market” (which is an abstract and poorly understood entity). Society is starting  to look for new ways to produce and exchange value, ways that are more open, efficient, less competitive, and inevitably based more on common visions and shared paradigms.

One can debate endlessly why this revolution at hand is so disruptive—and promising at the same time—regarding the new possibilities for communities to create value and build businesses but we should focus on a few key points.

I recently read this piece on Mashable, here’s a critical passage:

“Whether collaborative consumption is truly a shift in consumer behavior or just a glitch on the radar, at the very least, it has shifted the mindsets of a small subset of our population … people have been sharing for ages now, but online peer-to-peer marketplaces are making it dead simple.”

Peer-to-Peer. It’s in these three words that we can identify the fundamental paradigm shift the market-society is going through these days. In fact, P2P means fewer intermediaries, less constraints, direct relationships: relationships that—being from person to person—inevitably lead to ahumanization of the exchanges, behind  solely commercial relationships.

In this regard, it is worth citing this Campbell Mithun research where emotional benefits ranked among the most valued by sharing economy participants:

Four out of five reasons are related to the empathic and community sphere, with inherently social implications.

While the so-called sharing economy is sometimes awaited by some as the next big business thing and depicted by others as the final affirmation of access over ownership, this radical change also has a strong characteristic of being a pursuit of efficiency and innovation at all costs.

John Winsor recently wrote an illuminating piece about the real reasons that are transforming today’s economy:

“Fundamentally, economic value is created from economic inefficiencies … While this all started slowly, today (thanks to digital revolution) every sector of the global economy is being affected by the relentless drive for efficiencies….”

Let’s set aside the discussion on the causes and the unstoppable process that—if we’ll ever make it—is our last hope to transform consumer society into something more significant and sustainable in the long-term. If we assume therefore that society will change faster and faster (essentially for its preservation), what are the considerations that we must make in relation to creating resilient, long-enduring businesses and assessing the health of the economy as a whole?

In this context it is crucial, for anyone involved in generating wealth, to understand how the market will change in the future basically melting with society, mixing together the actors, reversing values, breaking down traditional barriers.

In fact, if there is a second key to understanding what is happening, in addition to seeking efficiencies, there is democratization. Internet pervasiveness, the “cloud” revolution, the commons-ification of knowledge, easier access to advanced technologies (until recently exclusively available to manufacturing giants), and crowdfunding all facilitate the entry of new players.

Today’s opportunities are for new actors, informal, with innovative labor relations, which even have a different concept of jobs. It is not difficult to see—or at least envision—today, megacorporations colliding with small, innovative startups, perhaps financed with crowdfunding, or also with non-profits, and voluntary-based projects.

Therefore, in a context that goes precisely in the opposite direction, that of competition and commoditization, with a multiplication of productive actors, every player today should aim for a difficult mission: to become unique, inimitable, essential. This can be achieved by harvesting a community, by creating a tribe of supporters and fans around its services and products.

The “future-proof enterprise” then is one that thrives in the world as it should and inexorably will be: socially sustainable, cooperative, inclusive, p2p, local, decentralized and more equitable in terms of profits. There’s no viable alternative. Old models based on control, large scale, and protection failed. Companies can no longer act as monolithic, centralized, revenue generation machines. Instead, they must become inclusive, create shared value, and thrive amidst radical change.

We come from a world where it was relatively simple to harm innovation by exploiting  competitive advantages: proprietary and obscure technologies, patents, customer lock in and more.

If we reflect on today’s meaning of innovation, we can see how it’s indeed much more about breaking down barriers and advantages, circumventing constraints and cutting inefficiencies by creating cooperative systems that favor the entry of new players, even small ones, that are closer to communities, and capable of generating real innovativation and driving real change. 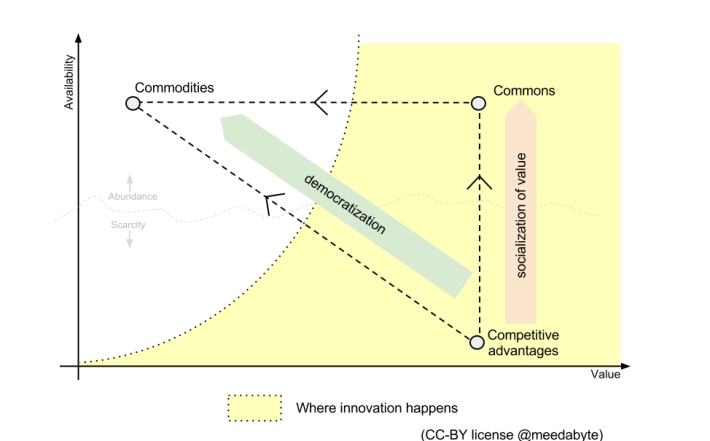 The example of 3D printing—one of the major promises of today’s micro manufacturing industry—speaks for itself. Since certain patents have expired we have seen an explosion of new use cases.

If we look at a larger, global scale, is interesting to notice that even sovereign states are—starting with public health and medicine—beginning to reject the very same concept of patent (the emblem of competitive advantage), in order to be able to suppress it when it is in the social interest.

In a world that tolerates less and less protectionism and brakes to change, a good way to generate innovation and become key players in any industry is, literally, to systematically give up competitive advantage. This will benefit the community and will help you—as a company or other productive actor—to focus more on innovation and value. If you give up competitive advantage first, you can control the process and not just depend on external factors that innovate without your permission.

I’m sure this is quite radical change in perspective, but there’s an example I was reminded in recent days on Twitter talking with my friend Benjamin, that can help clarify.

The mobile phone world has been recently disrupted by the debut of Android on the market (a royalty-free, open source operating system) that has generated the most massive wave of innovation ever in this industry. Nokia, the most illustrious of the incumbents and a century-old company, has been virtually erased from the market in just four years because of its inability to facilitate innovation within itself. In 2009 Nokia tried to opensource Symbian—which for years had been one of its main differentiating factors—to chase innovation. Now Nokia sells its patents, thereby giving up its last competitive advantage, and is significantly lagging behind. In addition to Nokia we could also mention the history of Kodak (again from John Winsor’s post, which really gets to the point):

“Currently, innovation is happening so fast that we have a difficult time adjusting. A great example is Kodak … they invented digital photography but couldn’t change their business model fast enough to make the transition.”

Counting on Competitive Advantage is Risky

Competitive advantage can be risky, but in what ways? Consider the market situation in the following image: 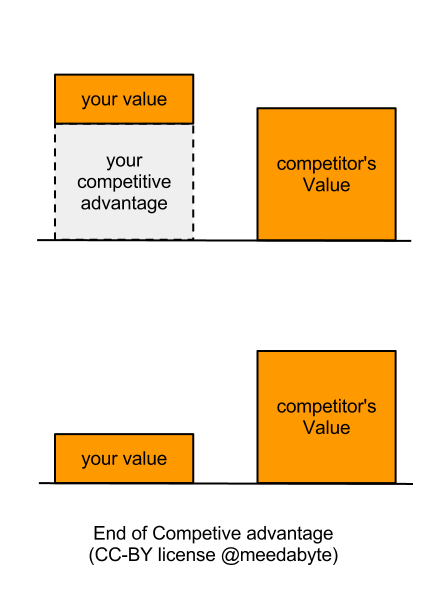 With the player on the left, things are fine as long as the competitive advantage on which its value proposition is based still stands. When that advantage breaks down (a patent expires, a new alternative technology matures, a new process emerges—and this, mind you, is happening faster and faster) its value on the market is suddenly less than its competitors’ which, also because of the gap, innovated more in the meantime.

Even more interesting—and far more complicated to handle for an incumbent player that bases its business on competitive advantage—is to consider that, by virtue of the radical democratization of production and maturation of collaborative technologies, its competitive advantage can be replaced by a “commons,” a shared value system that is expected to grow over time, with various players that can coopetite over. 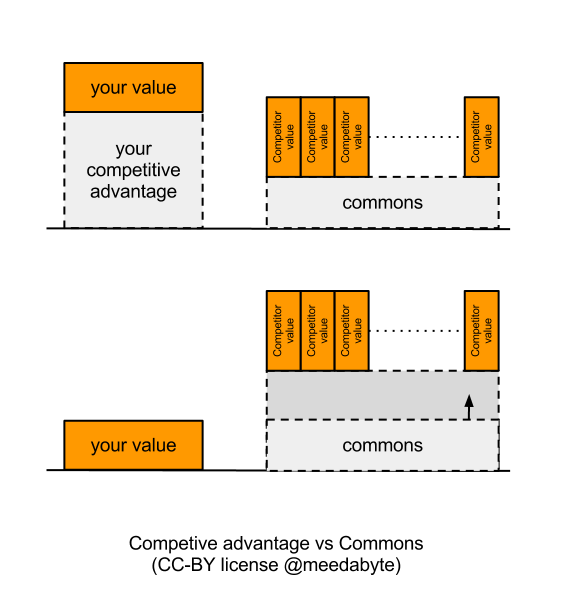 In short, basing a business on a competitive advantage nowadays is very risky: the pace of change can quickly transform you from a leader into a follower.

How to Do It—Going Forward, Going Deeper

In a world in need of change, where communities matter and commons-based peer production is often a viable alternative for creating innovation (as open source software and hardware taught us), companies should therefore be at the forefront in generating long-term change, focusing on meaning and not only think about maximizing short-term profits.

The focus of the future-proof company should switch from protection to creation, from enclosure to inclusion. Companies should be facilitators of meaningful change whose inspiration comes directly from society at large, an entity for which the future-proof enterprise shall necessarily provide a role.

What, then, does it mean to be the market-leading company of tomorrow?

First we must set new goals, such as seeking innovation and value “socialization” (humanization) rather than inequitable profit maximization since the world itself is evolving towards a new landscape that simply will prevent this from happening by virtue of protectionist strategies.

The company of tomorrow will have to create a unique and in-commodifiable value built around relationships of trust with the community that will outlast any competitive advantage. The future proof enterprise must become a platform of value creation and exchange, by looking at co-production mechanisms—to involve the community—in addition to more traditional employment relationships.

If we were to summarize the ten commandments for the future-proof enterprise they would be:

Being a resource for the community will make your business unique and able to face the future. Eventually, it will make yours a resilient enterprise with the hope of make a lasting contribution to humanity.